HELP! Someone Filed A Tax Return In My Name!

There’s No Short Cuts To Getting Out Of Debt

With the deadline looming for taxpayers, the crunch will be on for people scrambling to get their final documents together and submit their official tax return. Imagine this scenario. You submit your tax return only to receive a rejection notice from the IRS several weeks later saying that they have already received a tax return submitted by you already. How’s that for a situation that is sure to rock your world.

Unfortunately, in today’s world all you really need are some social security numbers and the internet to start winning at the tax return identity theft game.  According to TIME Magazine, in 2013 alone more than 5.8 Billion in refunds were issued to criminals who were using other people’s personal information.  The scale, scope, and execution of these fraud schemes have grown substantially in size.

What should you do if someone stole your tax refund?

If your identity is stolen, the hardest part of this process is going to be the wait and it generally won’t get fixed in a week or two.  You may also want to notify your banks, brokerage companies, or other organizations to put them on alert that your identity may have been stolen. Use these smart money moves to help you know what to do if someone steals your tax refund!

When You And Your Spouse Just Can’t Agree About Money 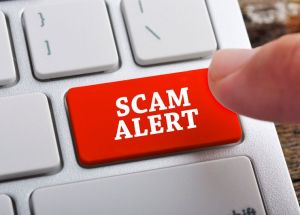 Four Tax Scams You Should Know Before You File

Don’t Get Social With Your Social Security Number